This work is a comedy interwoven many elements of "Yuri" in a slice of life. I strongly recommend this to those who like "Yuri" and "slice of life". The character's cuteness and comedy are excellent. This is unique and excellent among slice-of-life genre works. 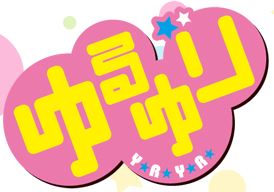 Yuru Yuri is an eccentric comedy about a group of girls who spend their spare time drinking tea and fawning over each other, all while completely failing to even notice the supposed main character Akari amongst them.

Her way of speaking seems to be suitable for her age. She calls Kyoko and Yui without “-san” because they are childhood friends. (This meaning is not malice but familiarity).

She talks in a very bright tone.

She is a woman, but she has a characteristic of talking in a masculine tone.

She basically talks a wording appropriate for her age. However, she often plays on words related to a place name. “罰金バッキンガム” is pronounced “ばっきん ばっきんがむ”.

She speaks “関西弁” (かんさいべん, Kansai dialect) because she is from Kansai. 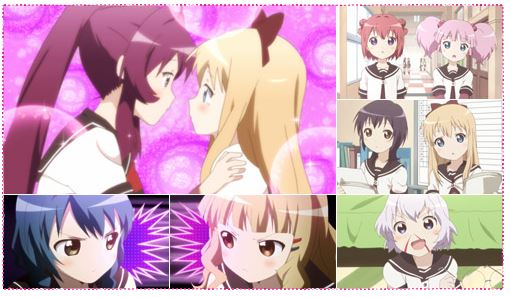 “YuruYuri” is a strong comedy anime and the characters like contrasting conversations that can be unfolded. However, the number of difficult words to appear is small. Some words “幼馴染み” (おさななじみ, childhood friend) or “腐れ縁” (くされえん, inseparable relationship) appear repeatedly. So if you prepare these terms beforehand, you can enjoy this work without problems.

The word used by the character is basically a standard Japanese word. You should pay attention to the four lines of Yui, Chitose, Ayano, and Himawari. Their conversation is not too difficult.

In addition, the work title “Yuri” is the origin of “lily” pointing to homosexuality in women in Japan. And there are mild depictions of homosexuality even in this work. If you can tolerate the point that it is a comedy with “Yuri” as a motif, the conversation itself is easy to hear because there are few difficult words and it will be helpful for beginners to study Japanese. 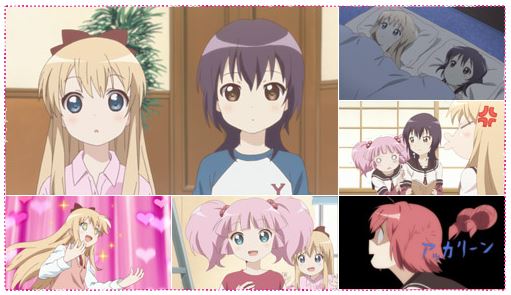 The proportion of gags in everyday conversation is quite large, but surprisingly difficult terms are few. Although difficulty level of terms and conversation is 8th grade, difficult terms occurrence rate is very low (0.8 terms/episode). Therefore, it is very easy for beginners to watch and listen if you prepare in advance in 5. Difficult Term List. However, be aware that some characters have a very distinguished way of talking.