In my view, this is the ultimate "slice of life" anime. The unique color shades that match the story and the worldview are wonderful. Also, music and atmosphere are in harmony. Yui Makino’s singing voice is like the gentle wind is stroking our cheeks, and gives us healing. BGM is also outstanding, and the emotional change and scene development are transmitted smoothly. Finally, in this work, there is a unique tempo feeling centering on the story of depicting the subtlety of humanity. 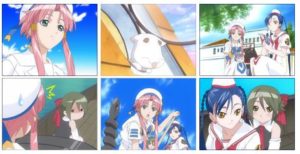 Drift peacefully into Neo Venezia, a city on the planet Aqua (formerly known as Mars). By the 24th century, humans have found a way to colonize the previously uninhabitable planet. As futuristic as that sounds, Neo Venezia is still teeming with rustic beauty; gondolas on wide canals and waterways are the main mode of transportation. The city itself is a faithful replication of Manhome’s (the planet formerly known as Earth) Venice.

This is the workplace of Akari Mizunashi, a free-spirited teenager from Manhome who is now a novice Undine. Join Akari as she becomes closely acquainted with other Undine, tourists, Neo Venezia’s residents, and even the city itself, learning many valuable life lessons along the way, such as the wonderful truth that there are such things as manmade miracles.

She often talks in a simple polite tone (Desu/Masu). On the other hand, she sometimes speaks a comical wording and often says “Hawawa” or “Hahi” etc in a slow tone. As she is a sensitive and romantic girl, she often murmurs poetic lines on occasions when happy events or impressed scenes (“お花の団体さんが藍華ちゃんのお客さんだね”, おはな の 団体さん が あいかちゃん の おきゃくさん だね, that means a group of flowers is Aika ‘s guests).

She is a strong spirited character and has a sharp tongue. She is caring and a good person at heart.

The tone of her talk is polite and ladylike. “あらあら” (Ara ara) or “うふふ” (Ufufu) is her habit. 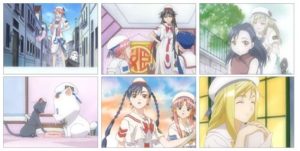 Several unique words such as “Manhome” and “undine” appear but it is not difficult to watch. Because the main character is growing as a gondola rower, words such as “見習い” (みならい, apprentice), “半人前” (はんにんまえ, half-fledged person) and “一人前” (いちにんまえ, full-fledged person) often appear. Also, because the main character is an employee of the company “ARIA company”, simple words related to business such as “社長” (しゃちょう, president) or “予約” (よやく, reservation) appear frequently.

Difficult Japanese does not appear frequently throughout this work, and since many of the characters speak in politeness, I will recommend this anime for Japanese beginners to watch as a reference for everyday conversation. Since the main character is a woman, it can be recommended as teaching material to learn how to speak like Japanese women. 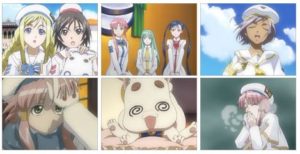