This is a famous anime that caused a social phenomenon in Japan. Washimiya Shrine, one of the scenes, has more than 100,000 visitors annually, and the theme song's CD sales exceed 200,000.

The story consists of 24 episodes with a theme of a certain everyday typical story. There are many parodies of various anime including Haruhi. You can see it fun till the end. I think that the ending was also good. The main 4 girls are also fascinating enough, but all of the characters around them are also very attractive.

Regarding the theme song "もってけ!セーラーふく", the lyrics are unknown, but the melody bears a certain familiarity and it will play on loop in your head once you listen to it. There is something attractive that does not make a sound, but remind you of the world view of "Lucky Star".

Although this kind of slice-of-life anime is often seen as having only "moe" elements without contents, this anime was different. The balance of real everyday and "moe" elements is wonderful, and it is a highly rated brilliant anime as a whole.

It is a high school girl in daily life which is an otaku girl “Izumi Konata” and an ordinary girl “Hiiragami Kami” who feeds Konata’s lines. This is a novel work that depicts the loose and funny everyday life of high school student girls. This anime shows people’s ordinary life depicting relatable events that you would be familiar and say “oh, that happens to me too!” 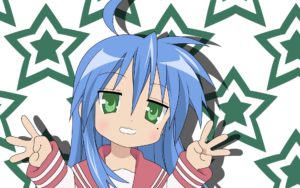 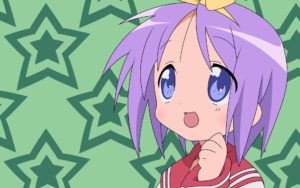 Normally it should be “Konata-chan”, but part of the name “Kona-chan” is omitted. Omitting a name makes them feel cute and familiar. 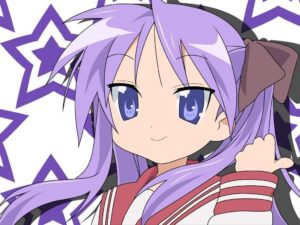 She is Tsukasa’s twin old sister, but her tone is stronger than Tsukasa. She sometimes speaks in a tone like an order like “ちょっと待て!” (ちょっとまて, Wait a moment!).

Kagami is in charge of the role of Tsukkomi. Tsukkomi is a role to point out that “It is doubt or strange” in a conversation that is in doubt or a contradictory conversation. Kagami’s “ちょっと待て!” includes the meaning to point out the funny part of it before. 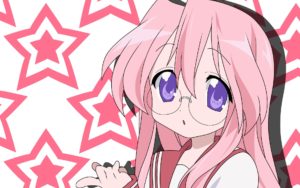 She speaks like a lady. In Japanese, there are things called “role words” like lady’s words. A role language is a stereotypical way of speaking that “people of such status or role will speak in these words”.

Although it is a role word that appears frequently in Japanese anime work, it is sometimes different from the tone that the actual Japanese speaks. Also, she has features that speak very long and difficult lines.

Although she speaks a long line because of her abundant knowledge, many specialized words appear in its contents, and even Japanese people can not understand the contents perfectly and easily. Therefore, even if you do not fully understand what she says, you do not have to get disappointed.

This anime mainly shows casual everyday conversations among high school students. At first glance, it seems like suitable for beginners in learning Japanese because there are also many lines at slow speed. However, it is difficult to fully understand by just watching this anime once, such as Konata’s geeky talk and Miyuki’s long lines. In order to understand and enjoy the contents of the conversation in this anime, it is necessary to have knowledge related to Japanese subculture. In terms of studying Japanese, this anime is for over Elementary level learners (or intermediate level).

Since topics contain many comedy elements, various kinds of terms emerge and the difficulty level of terms and conversation is high: 16th grade. In addition, since there are many parody elements, understanding the Japanese used is not easy unless you know the original. For example, “マンモスうれぴー”, “よっこいしょういち”, “テモテー”, “でもそんなのかんけーねー” and so on.

Listening to their daily conversations obediently helps your Japanese learning because difficult terms occurrence rate is low: 3.5 terms/episode. However, since it is necessary to judge whether it is a difficult term or not, I would like to recommend this to over Elementary level learners.