The next series, "Tamayura: hitotose" is one episode of 30 minutes, but the first work of this series is one episode of 15 minutes. Although each episode of this work is 15 minutes, this is a highly complete story that can satisfy viewers who place importance on the content of the story. This is a great work with an equivalent of 30 minutes anime since psychological depiction is also drawn carefully.

The story takes place in Seto Inland Sea and is about a girl who likes taking pictures. This is a story of old townscapes, beautiful seas and islands, warm people and newly made lovely friends.

She tends to say judgments on things like “合格” (ごうかく, pass) or “不合格” (ふごうかく, fail). Also, she is not happy about how she is called “かおたん” (Kaotan is her nickname) by Norie, and she often gets angry saying “かおたん言うな!” (Do not say Kaotan!). 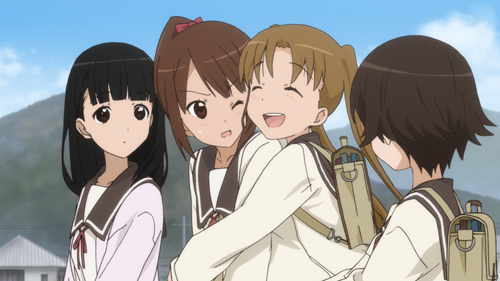 Among frequently appearing words, “たまゆら”, “試作品” (しさくひん, prototype), “秘境” (ひきょう, unexplored area), “おんぶ” (piggyback), etc. may be difficult words. “試作品” and “秘境” is a common word as Japanese, but “たまゆら” which is also this work title is a difficult word that Japanese people do not know the meaning.

However, since the whole everyday conversation in this work is almost a standard word and the content is also simple, beginners will be able to increase understanding of the words by repeatedly watching this work.

You should only care that there is one character of high strong dialect. 90% of other everyday conversations are in ordinary Japanese and very few difficult words appear: 8th grade. However, difficult terms occurrence rate is slightly less 3.0 terms/episode. If you prepare in advance on “5. Difficult Term List”, it will be very easy for beginners-level learners to watch and listen.