Preference for this work depends on whether you like the atmosphere of it or not. It has a story of people and youkai, but you would surely be impressed since there are many humans drama as well. You will feel like your heart is purified. This is an excellent work, especially its worldview is outstanding. 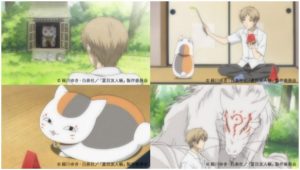 While most fifteen-year-old boys, in one way or another, harbor secrets that are related to girls, Takashi Natsume has a peculiar and terrifying secret involving youkai: for as long as he can remember, he has been constantly chased by these spirits. Natsume soon discovers that his deceased grandmother Reiko had passed on to him the Yuujinchou, or “Book of Friends,” which contains the names of the spirits whom she brought under her control. Now in Natsume’s possession, the book gives Reiko’s grandson this power as well, which is why these enraged spirits now haunt him in hopes of somehow attaining their freedom.

Without parents and a loving home, and constantly being hunted by hostile, merciless youkai, Natsume is looking for solace—a place where he belongs. However, his only companion is a self-proclaimed bodyguard named Madara. Fondly referred to as Nyanko-sensei, Madara is a mysterious, pint-sized feline spirit who has his own reasons for sticking with the boy.

He uses two first personal pronouns: “俺” (おれ, Ore) and “僕” (ぼく, Boku). This is not because he has a duality in personality, but because he uses the proper one by judging the position and situation of the person in contact. The way of talking is suitable for his age, but it gives the impression of being a little calm by nature.

Although he tends to use honorifics to superior people, they somewhat seem to emphasize politeness. When talking to a person of the same age, he uses a boy-like word. So you will be able to learn to distinguish words properly by watching the difference. 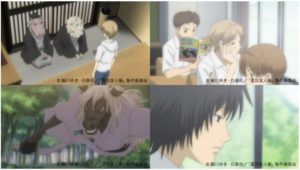 Since the conversation used in scenes where youkai are not involved is a standard Japanese daily conversation, it is easy to hear. For words related to youkai, if you prepare in advance, it will also be an opportunity to learn fantasy aspects of Japanese culture. “Natsume Yujin-cho” is a good work for beginners to refer to as learning Japanese. 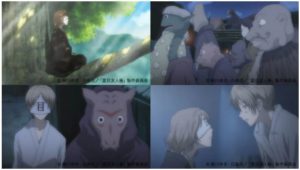 Even though youkai is a theme, difficult terms hardly appear, and the conversation content is simple and easy. Although the difficulty level of terms and conversation is 12th grade, the difficult terms occurrence rate is very small: 1.0 terms/episode. Therefore, it is very easy for beginners to watch and listen if you prepare in advance in 5. Difficult Term List.