If you only look at the title, you may shun watching. However, from the conclusion, this anime is one of the outstanding works made up of the highest quality drawing, directing, story and voice acting. Especially, the opening animation is outstanding.

The first half will be a comedy and the second half will be a love story. You would be drawn into this anime at once. Characters were also outstanding individuals rich in personality.

Characters who are delusional say fantasy terms and reproduce with an exaggerated phrase. Put aside the idea of Japanese learning for now, and purely enjoy this extraordinary anime! 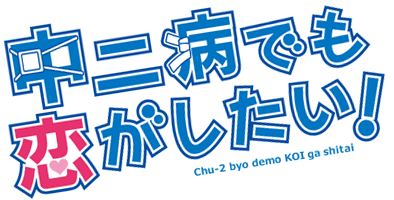 Togashi Yuuta who became a high school student erased the delusional past. However, on the evening of the day before the school entrance ceremony, he encounters a girl who wears a medical patch over her right eye getting off the floor above his apartment.

On the next day, Yuuta reunited with her at school. The classmate Takanashi Rikka is delusional who believes herself to possess a “邪王真眼” (じゃおうしんがん, Wicked Eye). She forcibly makes a “contract” with Yuta and follows him around.

This is a school love comedy anime that develops while involving others around Togashi Yuuta in former delusional and Takanashi Rikka in active delusional. 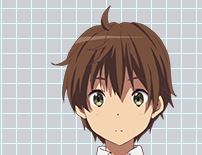 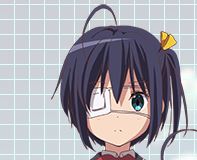 She is a high school first-year-student like Yuuta. Even when she is a high school student, she puts herself in a delusional world and speaks in exaggerated words and phrase. She has familiarity with Yuuta who was delusional in the past. When she first met Yuuta, she said the line that is often found in fantasy anime or games such as “悠久の過去、あなたと私は出会っている” (ゆうきゅうのかこ、あなたとわたしはであっている。 Eternal past, you and I have met). I tell you just in case this is not a general tone of high school girls. She acts and speaks based on the settings she made herself, so often other people can’t understand her conversation. Therefore, from the perspective of learning Japanese, you should not imitate her way of talking. If your Japanese skill is above Advanced, her dialogue has sufficient difficulty as an advanced Japanese listening practice. 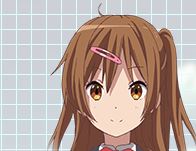 She is Yuuta’s classmate, also was an experienced delusional person. She talks to her classmates in a soft polite tone but speaks to Yuuta and other friends in a somewhat high-pressure attitude. However, this high-pressure attitude is a behavior because of opening her hearts to Yuuta and there is no malice. Her Japanese is suitable for listening because her Japanese is the same as the content used by real school girls for everyday conversation. (But, be aware that she sometimes does a delusional way of speaking.)

During the first watch, I recommend that you enjoy the story with subtitles. Once you watch it and understand the meaning of the conversation, watch it again. You would understand how exaggerated the phrases are. By watching this anime, you would be able to know the breadth of Japanese expression.

6. Advanced can Learn Japanese with This Anime

Because the characters are related to delusional, there are various words in this anime, such as formal words, S/F terms, and exaggerated phrases. Therefore, despite this anime is a school love comedy anime, the difficulty level of terms and conversation becomes the difficulty of the highest: 20th grade.

The point which seems to be especially difficult for Japanese learners is that there are two patterns when each character plays a normal way of speaking and when they talk in the way of dramatic phrase. Therefore, I recommend Advanced learners who can distinguish them to learn Japanese with this anime. However, repeatedly saying, since this anime is an outstanding work, I want you to see this anime separately from learning Japanese.