Although this Anime is not popular abroad, it became very popular in Japan. I guess that Japanese like this straightforward story of youth. People overseas and in Japan seem to have different tastes for this very classical youth-story. It is a very balanced, excellent work with a wonderful anime in the live scenes. I highly recommend watching this, when you get an opportunity. 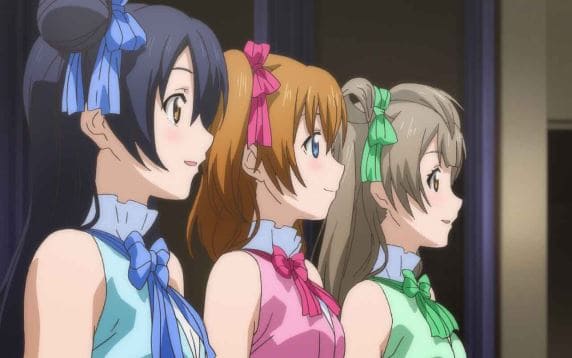 What can we do when our school is in danger of closure? We can become idols and get more students by promoting our school! This is the beginning of a youthful school-drama with us, 9 girls! 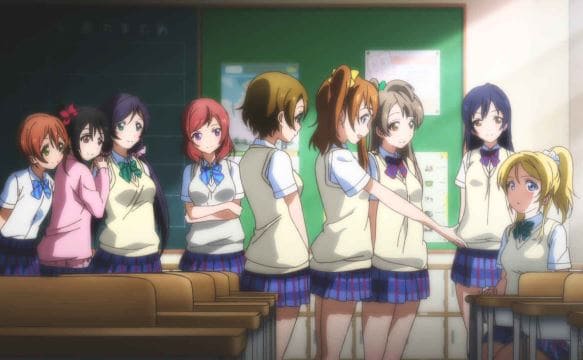 The conversation between high-school girls who want to become school idols forms the main part of this Anime. It is mainly a general conversation about their club-activities, and especially you hear a lot about music, dance, and any idol-related terminologies such as “振り付け” (ふりつけ, choreography), “歌唱力” (かしょうりょく, singing skill) and “朝練” (あされん, morning training). The emotion of the characters who break their own shells and become school idols also appear in the conversations. 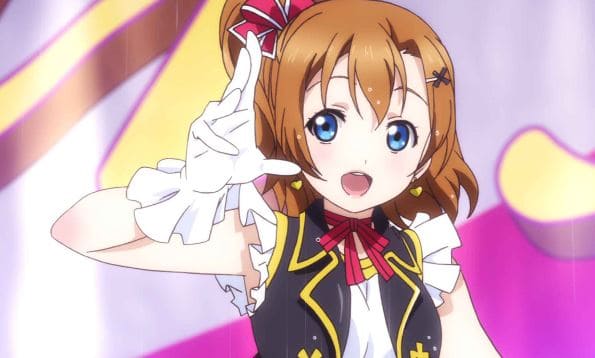 In this Anime, terms that are related to school-idol activities, such as “部活” (ぶかつ, club activities), “廃校” (はいこう, school closure) and “振り付け” (ふりつけ, choreography) appear, and it is easy to follow. It makes Japanese learners easier to approach this Anime as there are a limited amount of comical elements and the terms that appear in this Anime are also not diversified. There are also very few characters that speak in an extraordinary way, except for Nozomi Tojo, who speaks with Kansai accent (Rin Hoshizora’s “にゃ” is still acceptable). Its difficult terms occurrence rate is 3.3 terms/episode, which is quite low. Terms that appear in this Anime all belong to the theme. Therefore, this Anime is highly recommendable to Elementary Japanese learners.